The property of a substance due to which it opposes (or restricts) the flow of electricity (i.e., electrons) through it.

Metals, acids and salts solutions are good conductors of electricity.

Due to the presence of a large number of free or loosely-attached electrons in their atoms. These vagrant electrons assume a directed motion on the application of an electric potential difference.

Those substances which offer relatively greater
difficulty or hindrance to the passage of these electrons
are said to be relatively poor conductors of electricity like
bakelite, mica, glass, rubber and dry wood.

The practical unit of resistance is ohm. The symbol for ohm is Ω.

A conductor is said to have a resistance of one ohm if it permits one ampere current to flow through it when one volt is impressed across its terminals.

For insulators whose resistances are very high, a much bigger unit units are i.e.,

In the case of very small resistances, smaller units are used i.e.,

where ρ is a constant depending on the nature of the material of the conductor and is known as its specific resistance or resistivity.

In the S.I. system of units,

where σ is called the conductivity or specific conductance of a conductor. The unit of conductance is siemens (S). Earlier, this unit was called mho.

This law applies to electric to electric conduction through good conductors and may be stated as follows :

The ratio of potential difference (V) between any two points on a conductor to the current (I) flowing between them, is constant, provided the temperature of the conductor does not change.

1. The relationship of current, voltage, and resistance is given by Ohm’s law.

3. Ohm’s law applies to all series, parallel, and series-parallel circuits.

When some conductors having resistances R1, R2 and R3 etc. are joined end-on-end as in Fig. 1, they are said to be connected in series. 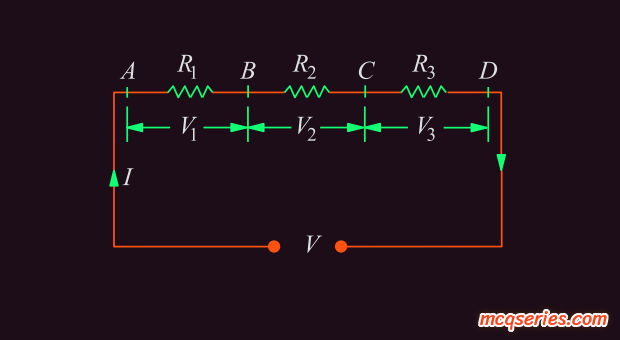 It can be proved that the equivalent resistance or total resistance between points A and D is equal to the sum of the three individual resistances.

Being a series circuit, it should be remembered that

Three resistances, as joined in Fig. 2 are said to be connected in parallel. 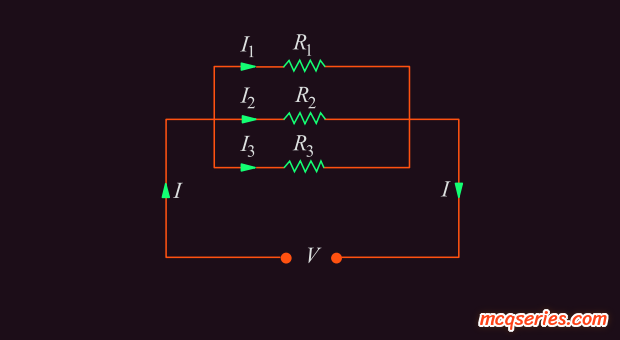 Being a parallel circuit, it should be remembered that

(i) p.d. across all resistances is the same.
(ii) current in each resistor is different and is given by Ohm’s Law and
(iii) the total current is the sum of the three separate currents.

The main characteristics of a parallel circuit are :

When two points of circuit are connected together by a thick metallic wire (Fig. 3), they are said to be short-circuited. Since ‘short’ has practically zero resistance, it gives rise to two important facts :
(i) no voltage can exist across it because V = IR = I × 0 = 0.
(ii) current through it (called short-circuit current) is very large (theoretically, infinity).

1. KCL is a law stating that the algebraic sum of the currents flowing into any node in a network must be zero.

2. KVL is a law stating that the algebraic sum of the voltages around any closed path in a network must be zero.

A helpful mnemonic for writing KVL equations is to assign the polarity to a given voltage in accordance with the first sign encountered when traversing that voltage around the loop.

3. The following is the basic method (or fundamental method or KVL/KCL method) of solving networks :